Taking TV shows Out of Home: The Proven Power & Influence of an Incredible OOH Campaign

With 26% of Brits saying they won’t watch linear TV again, how can brands evoke excitement and build anticipation without a 30-second TV preview?

Out of Home (OOH) of course! With its broadcast capabilities and ability to reach 98% of UK adults every week, OOH is a strong contender for the launch and promotion of TV shows.

When our TV shows are launched using OOH, our favourite character’s worlds and our worlds collide in real life. This excitement leads to the social amplification of OOH campaigns – unique to the medium – with pictures and videos taken and shared on social media, earning the campaign hundreds of thousands, if not millions of additional views.

A bold statement we know, however, we’ve had the privilege of working on many of these viral campaigns. Keep reading for a behind-the-scenes look at two campaigns that were executed by our Creative Solutions team: 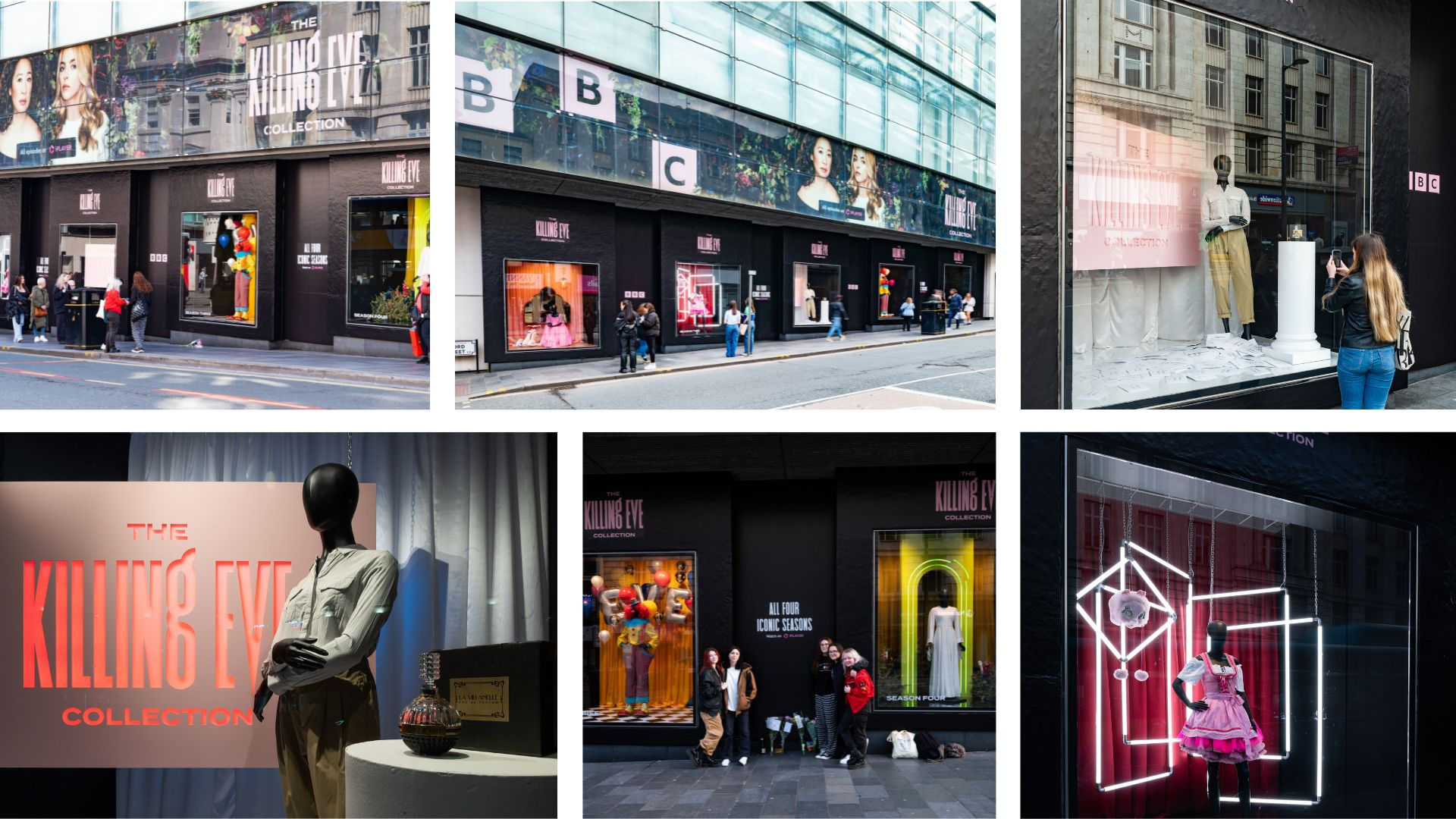 A beloved British spy thriller television series, the final season of Killing Eve aired in March 2022 and was met with mixed reviews about its ending. To celebrate all four seasons now available to stream online via BBC iPlayer, we worked with the BBC and Havas Media UK to bring the stylish and hugely popular outfits from the show to lead actress Jodie Comer’s home of Liverpool.

Taking over Lord Street in Liverpool ONE, we filled a shop front with both Villanelle and Eve’s iconic outfits. Quickly gaining traction, the installation received over 824.1k views on TikTok and around 1.4 million potential impressions on Twitter.

*Potential Spoilers* However, the biggest surprise came from the actions and emotions the installation evoked. Upset with the ending of their favourite show, fans began to lay flowers at the site of the shop front. One bunch quickly turned into many, with fans in London laying flowers on London Bridge too. For fans overseas, one fan created a GoFundMe page so that they could pay for flowers to be laid too. The GoFundMe page managed to raise over 1.9k euros.

Another popular British crime drama series, Peaky Blinders has taken the world by storm. Spanning six series, the show has gained a cult following and secured its spot as one of the BBC’s biggest ever drama series. Over the years, we’ve worked with the BBC, Havas Media UK and Global Street Art to drive excitement for the series and to re-engage fans.

For series five, we leveraged social media to create a call to arms for fan art with over 1,200 pieces submitted and 16 chosen for a nationwide poster campaign. Two final designs were turned into stand out murals, resulting in fans travelling across the UK to take selfies with the work. The campaign gained widespread PR coverage and launched to an audience of over 6.2 million. 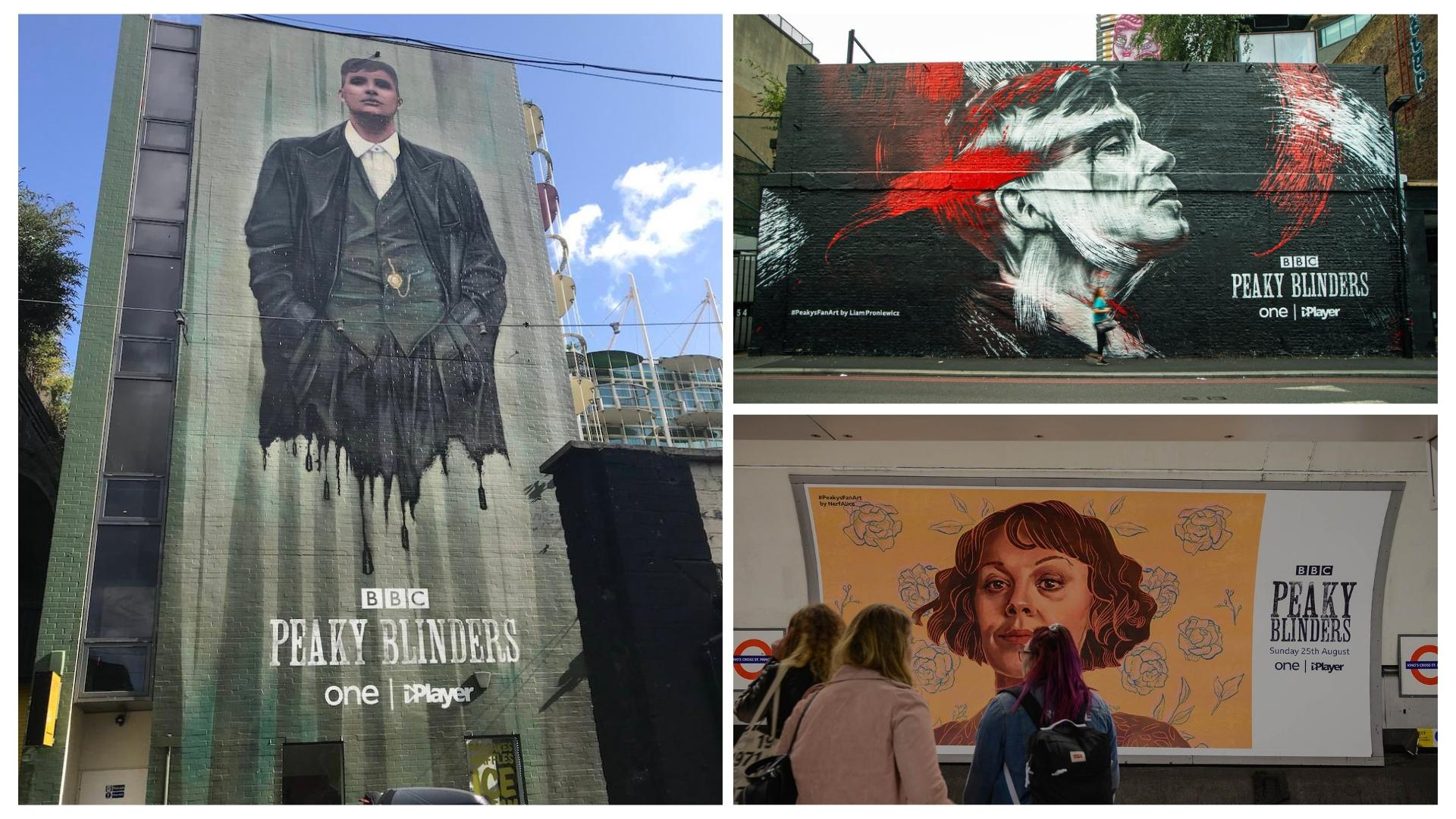 With murals proving popular with its fans, we would do the same for the final season but with a twist…

Spanning over 42ft tall, we unveiled a mural of the Peaky Blinder’s patriarch Tommy Shelby in his hometown of Birmingham. The mural, by street artist Akse, would announce the previously secret broadcast date of the show’s final season.

Gaining traction quickly online, the mural gained widespread PR coverage in the UK as well as Portugal, Germany, Spain and Greece. A video shared of the mural by the BBC across YouTube, Facebook and Instagram went viral, gaining over 2.7 million views and over 802,000 likes.

The power of OOH advertising for our favourite TV shows has garnered incredible results and emotions from fans around the world. There’s a huge range of mediums, locations and creative ideas that we can use to create an even bigger affinity for TV shows with their fans as well as future fans.

If you’d like to work with us or enquire about your future OOH campaigns, don’t hesitate to get in touch.